if you would like to order uniform shorts, arm-ups, or backpacks, you need to place your order by midnight TONIGHT!

The meet takes place at, and around, Waneka Lake Park, which is nestled in a dense neighborhood in Lafayette. While street side parking is available, it is limited. With the influx of the many high school teams, middle school teams, and community members, finding parking will be a challenge. I highly recommend simply navigating to, and parking in, any of the lots at Centaurus High School, and then walking through the neighborhood to Waneka Lake. It is a pleasant ~1km walk, and will save you the added stress of finding street parking.

Handicapped parking, staffed by a volunteer, will be available near the start line and bus drop-off at 1600 Caria Dr, Lafayette, CO 80026.

Sorry for the confusion:

WASH PARK: Runners, please check the window to Coach Kohuth’s office for updated entries for Thursday. (We will post when we get them).

HOPE TO SEE EVERYONE AT TONIGHT’S TEAM POTLUCK

WASH PARK: Runners, please check the window to Coach Kohuth’s office for updated entries for today. (We will post when we get them).

Sophomores:  side dish or salads

Freshmen,  We welcome you to the team and really need you to join your team for dinner.  This is why we assign the main dish to you!

Remember to be in your uniform and on the turf (center of the track) by 3:00pm today if you want to be included in the photo.

Uniforms: If you did not get a uniform lat week, you can go to the Counseling Office at 2:45 today to get one. You will not be able to get one tomorrow, so be sure to come in!

Entries for Wash Park on Thursday.

Below are the names of the runners entered to race on Thursday.  Dismissal will be at 1:15 for a 1:30 departure.

UNIFORM SHORTS, WARM UPS, BACKPACKS: We need all orders for personalized items to be placed by Thursday Aug 30 so we can get these ordered as quickly as possible. You can order on our website link here.  These items are optional. 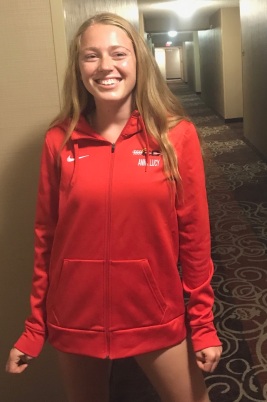 SWEATSHIRTS: We have sold out of our 2018 white sweatshirts in all sizes except large. If there is sufficient interest, we can place a second order  and will have them within two weeks. Please fill out this form if you would like to order one. Please reply by Friday Aug 31 so we can get these ordered soon.

RUNNERS ROOST: Shoe shopping tonight! Hope to see you there.

Finally, the East Angels got to start competing. This week’s Varsity and JV-1 teams traveled to the Cheyenne Mountain Stampede to preview the State Meet course against some of the toughest competition in 5A. In fact, of the 20 teams entered, the Girls 5A race featured five of the top-10 teams in the preseason poll and two of the top-10 boys teams battling it out over 5 hilly kilometers on a warm August day in Colorado Springs.

The Girls JV were the first to take to the course. While the JV race was not officially scored, it looked to be a close battle between runners from Denver East, Cherokee Trail, and Fossil Ridge. The Angels had three of the first twelve runners to cross the line, led by sophomore Lilia Scudamore in 22:31, followed closely by senior Lily Cory in 22:43 and sophomore Alana Marie Barros in 22:47. Senior Emily Turner crossed the line in 23:33, ahead of Grace O’Meara, Reese Brogden, and Ellie McWhirter, who each broke 24 minutes over the tough course.

The Varsity Girls race immediately followed the JV. Sophomore Abby Howard and junior Anna Lucy Buddenhagen led the Angels to a 9th place finish of the 20 teams, finishing in 37th and 42nd place respectively with times of 21:52 and 22:01. Junior Elena Thoman finished in 22:30 for 60th place, while sophomores Maya Nussbaumer and Julia Schor rounded out the scoring in 54th (22:52) and 59th (23:02). Making her high school debut, Ellison Mucharsky-O’Boyle finished in 66th in 23:31.

Later in the afternoon, it was the JV Boys turn to toe the line. After more than three tough miles, junior Ballard Kauffman would be the first Angel to cross the line, in time of 20:09. Sophomore Cyrus Jenkins-Nieto would closely follow in 20:14, and senior Jack Thompson would be the next Angel to finish, in 21:39. Junior Taylor Lucas and 9th grader Nick Virnich would also come in under 22 minutes.

For the Varsity Boys, it was juniors Will Daley and Asher Hoyt moving up smartly in the second half of the race to snag podium finishes of 9th and 10th place with times of 17:10 and 17:11 respectively. The next three Angels came across the line separated by only 13 seconds, as sophomore Xander Pacini finished 69th in 19:09, junior Elijah Bruggeman in 72nd in 19:12, and 9th grader Eamon Nussbaum in 79th in 19:22. Junior Riley Nickols survived a fall during the race to finish in 93rd in 19:46, and Jack Beardshear finished 111th in 20:34. The Boys, like the Girls, finished 9th of 20 teams.

The following day, East’s JV-2 scrimmaged against Golden High School and Green Mountain High School at the 10th annual Ram Run 5K hosted by Green Mountain –  where the Angels in attendance saw more hills over 5K than they might see at all the meets for the rest of the season combined. Top performances were turned in by Paul Buffington in 24:04, Kerra Hendrickson in 24:59, Alia Quinby in 25:03, Marcus Burnett in 25:04, Alex Schor in 25:24, and Clara Lorenzo in 25:49. Coaches Miller, Fehrman, and Scudamore also ran the course well. A special shout out to parent Renee Supplee who not only came to pick up the tent, but also dropped a 24:48 for 5K!

This is a reminder that we have our shopping night at Runners Roost on S. Colorado Blvd at Mexico. We have usual practice at East at 3:15. Pizza, shoe fitting, and shopping start at 6:00. Families are welcome and also receive discounts.

Please RSVP if you are coming: https://www.surveymonkey.com/r/7LLY6PW