The Nike Southwest Cross Country Regional is at the Casa Grande Sports Complex on November 23rd. A handful of athletes from East have traveled to this race each year and have had a great time running great times. We are hoping to compete as a team for the first time ever.
Meet information here: NXR Southwest Info
Registration is due November 12th. To compete as a team, we much register as a team. So athletes should not yet register themselves. Please let Coach Kohuth or Coach Scudamore know if you plan to make the trip ASAP – by November 5th at the latest – so we can organize our registrations.
East Coaches will continue to coach interested athletes (and anyone else who wants to continue training) through this Regional Championship.
Athletes must arrange their own transportation to Phoenix, Arizona. If athletes arrive Thursday evening after 6pm or Friday morning by noon, the coaches may be able to help provide ground transportation to Casa Grande for the race and to hotels.
Athletes and their families will need to support the cost of the trip, but if there is sufficient interest, we may be able to pool costs for ground transportation and shared hotel rooms.
Please email Coach Scudamore with questions. (ddscudamore@gmail.com)

If you are entered for the Northfield Nighthawk Invite and cannot race, please fill out this form: Runner Unavailability Form

Tent:  Thanks to Angel parents, we will have a tent at the meet!  All tent transportation spots have been filled for the season.  Thank you to our xc parents, Justin, Sara, Renee, Lania, Kim, Tom and Brian for getting the tent to and from the meets.  Also, thanks to our coaches!   You are all appreciated so much for making sure our team has shelter.

On behalf of the runners, thank you for supporting the Angels!

East Angels suffering from the hot sun becasue they don’t have a tent to shelter them. 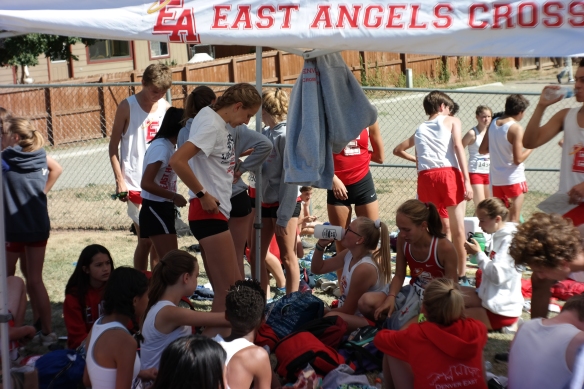 Happy Angels under their tent!  🙂

Thanks to everyone, the Angel Invite was a successful meet!  The dozens of parent volunteers made the meet go as smooth as possible.  We are so grateful for our parents and their willingness to help the team!

Here are some stats from our meet:

We have the honor of hosting the regional meet on Friday, October 18.  Now that we are warmed up, let’s do this again!  Please volunteer by clicking here:  Volunteer Sign Up for Regional Meet  School will not be in session on Friday, Oct 18.

Thank you for all you do for the Denver East Cross Country experience!

The Thornton (Margaret Carpenter) Recreation Center Multipurpose Fields are located off of 108th and Colorado Blvd. You can also park at the Rec Center or the parking lots located off of 112th Avenue and Madison Street.

East Angel Cross Country had a busy start to the Labor Day weekend, spread across 13 races at three different meets.

On Friday, the Open Girls and Open Boys 2-mile races at the Washington Park Invite would kick things off as temperatures hovered near 90 degrees. The Girls Team would race to a 6th place finish led by the impressive debut performance of freshman Maya Nussbaumer who finished 12th with a time of 15:36. Sophomore Teddy Hickenlooper opened his season with a 27th place finish in 13:09 to lead the boys to an 8th place finish.

In the Varsity Girls 5K at Wash Park, the all 9th grader team of Isabella Garcia, Claire Ely, Maya Winfield, Charlie Hite, and Clara Lonrenzo scored a 10th place team finish overall against their more experienced competition. The boys, similarly depleted of varsity experience at other races, were led by freshman Cyrus Jenkins-Nieto who finished 78th in 21:18.

Meanwhile, things were also getting started at the Arapahoe Warrior Invitational under similarly sultry conditions. There, things kicked off with the Boys Frosh/Soph race. Showing the same team leading form as the week prior, sophomore Will Daley ran to a 13th place finish in 18:41. Will was backed up by freshmen Ian Trautwein (19:11, 21st) and Xander Pacini (19:33, 26th) and sophomore Riley Nickols (19:34, 28th) for a 6th place finish of 25 teams. The Frosh/Soph Girls finished 2nd of 25 teams! The tight Angel pack included freshman Lilia Scudamore (17th, 22:24), sophomore Elena Thoman (19th, 22:41), freshmen Grace Burnett (22nd, 22:47) and Christina Doolan (23rd, 22:48), sophomore Maisie Moskowitz (26th, 22:51) and freshman Grace O’Meara (27th, 22:52). With most runners divided across other meets and races, the Angels ran only a handful of runners in the other races at Arapahoe. Notable performances came from a pair of East juniors; Lilly Cory (21:59) and Emily Turner (22:06) rolled over the trails and through the creek crossings at deKoevend Park in the fastest times for East girls for the day. 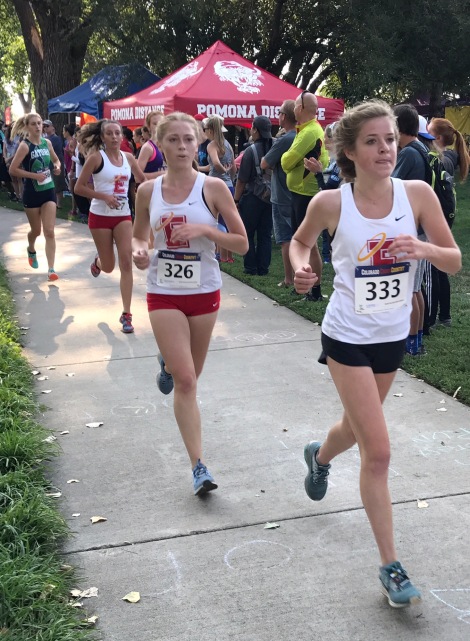 On Saturday morning, most of Denver East’s Varsity girls and boys took an early bus to Waneka Lake Park for the very competitive Centaurus Invitational. The Girls ran to a 7th place finish of 23 teams, finishing only behind teams ranked in the top-10 in the State in their respective divisions. Senior Laurel Kruger led the Angels with a 21st place finish in 20:10. Freshman AlanaMarie Barros finished in 20:50 for 37th, followed by a group of Angels who ran together for most of the 5K: senior Nell Salzman (21:17, 46th), junior Lilly Cory (21:20, 51st), sophomore Anna Lucy Buddenhagen (21:25, 53rd) and freshman Abigael Howard (21:42, 60th). For the boys, senior Harrison Scudamore raced to a second place finish in 15:50, behind only the top ranked runner in Colorado. Sophomore Asher Hoyt (17:08, 16th) was the top underclassmen in the race. Senior Jackson Adams (18:41, 67th) and sophomore Elijah Bruggeman (19:01, 81st) also had solid races and the Angel Boys finished 10th of 23 teams.

NOTE: You can see and share photos from all these meets at  https://eastcrosscountry.shutterfly.com (if you are not a member, request to join!)

The Angels will race at three different meets Friday and Saturday: Arapahoe and Wash Park on Friday and Centaurus on Saturday. Meet locations are on the calendar.

PHOTOS: You will soon receive an invitation to join the team Shutterfly account. From there you will see an album for each meet. Please open the meet album and add photos. We rely on parents to take pictures of kids racing and share them so please help out if you can. (You can request to join here or by going to https://eastcrosscountry.shutterfly.com

TENT: The tent needs to go to and from the meets and cannot be on the bus with kids. Please look at the schedule and sign up to either get it from the last parent and bring it to the meet or take it from the meet. The schedule is here.  The kids rely on having this for shade, so please help.

ENTRIES for each race can be found below.

Bus to Centaurus: Arrive at East at 6:15 am. Leave East at 6:30 (Centaurus Cross Country Invitational entries)

Course maps are available too:

Thanks for everyone who has volunteered to help and to those of you who are cheering on the runners. A couple important updates.

The high school championship is set as planned. The first race is at 3:15.

East is planning on having a FUN RUN at  5:00 in City Park for any middle school runners or family members who want to run the 3000 meter course through the park. The event is free and open to anyone who wants to run, and may be not be officially timed.

Please pass this on to anyone who has a middle school runner who may not have heard about the change.

Monday should be a beautiful day for running and spectating. We hope to see you soon!