During the next to last week of the Invitational season, the East Angels showed their stuff in three meets across two states.

On Tuesday the Angels flexed their muscle against DPS and Jefferson County competition at the North Viking Invitational on the hilly Case Willis Golf Course. The Varsity Girls took the win over 15 other schools by outlasting North 61-66 in what is a likely preview of the DPS Championship meet. Sophomore Abby Howard led the way again with a 9th place finish in 21:38, followed by the tight packing of Anna Lucy Buddenhagen (21:44), Anna Marie Barros (21:50) and Lilly Cory (21:53) in 11th, 12th and 13th. Lindsey Weyant would come across the finish line just a short time later in 22:00 for 16th place to round out the scoring for the Angels. The Girls JV also came home as champions placing five girls in the top-15. Ninth grader Annabel Filippini conquered the hills with a 4th place finish in 23:34. She was followed by junior Ellie McWhirter (24:01) in 7th, and ninth graders Grace Chambers (24:22) in 11th, Alia Quinby (24:59) in 13th and Lily Najmulski (25:01) in 15th.

On Friday, the top East Angel JV girls took on some of the best JV teams from around the Midwest at the Rim Rock Invitational at Rim Rock Farm outside of Lawrence, Kansas. The girls came just 5 points from securing the JV title, falling short to Kansas’s Blue Valley West High School 41-46. As has been the case in nearly every JV meet, sophomore Laura Romero was the champion finishing in a time of 19:57. Nearly everyone behind her also ran season bests if not outright personal bests. Sophomores Julia Schor finished in 7th in 21:02 and Lilia Scudamore in 11th in 21:11. Senior Emily Turner was 13th in 21:21 and sophomore Maya Nussbaumer was the final scorer, crossing the line in 18th place at 21:28.

Perfect conditions for fast cross country running greeted the Varsity Teams at Rim Rock Farms on Saturday. The Girls Varsity would take to the course first. The Girls finished 11th of 31 schools in the top division with teams competing from seven different states. Abby Howard dipped under the 20-minute barrier with a 19:55 run for 52nd place. Fellow sophomore Alana Barros had her best race of the season with a time of 20:13 for 68th place, followed by the fast closing senior Lilly Cory who clocked 20:16 for 72nd place. Juniors Anna Lucy Buddenhagen  (83rd, 20:25) and Lindsey Weyant (85th, 20:27) closed out the scoring for the Angels. 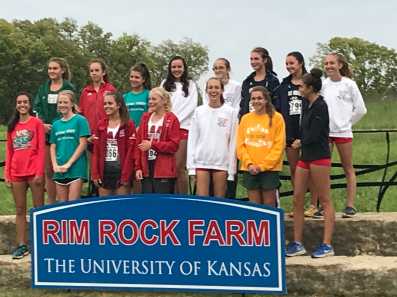 This week the Angels have the Northfield Invitational on Friday at Dick’s Sporting Goods Park. In addition, a select group of top JV runners are going to the first ever Emma Coburn Elk Run in Crested Butte on Saturday which should be a really special event. This is our last week of Invitationals before entering Championship Season. East hosts the DPS League Championships at City Park on October 9th. Parents should look for a request for volunteers email coming soon as we prepare to host this event.