Sweet and Bittersweet Results at 5A Region 3 Championships

The path to qualifying for the Colorado State Cross Country Championship runs through one of five regional qualifying meets where only the top-4 teams and top-15 individuals from each regional championship move on to the state meet.

5A Region 3, which predominantly includes schools from Boulder and Broomfield Counties, is one of the deepest regions in the state, particularly on the Girls side of the competition. The East Angels arrived at Broomfield Commons Park knowing they had their work cut out for them to make it to the State meet. After what had been a cool morning, the clouds drifted away and temperatures warmed to the mid-60’s – ideal for spectating, but a bit warmer than ideal for 5k racing.

The Boys race went off first taking on the dry course of predominantly hard packed dirt and crushed grinders paths but for a 200m stretch of grass fields at the start and finish. As is typical at this championship, a handful of runners capable of running sub-16:30 took off from the start, trailed by a pack of 20 or so runners hoping to find their way into the top-15 by the finish.  Among this pack were East’s trio of junior Quinn Higgins, senior Eamon Nussbaum and junior Ian Logan. Trailing a bit farther back were freshman Jonas Scudamore, senior David Anderson and junior Ben Hopper. By the 2-mile mark a group of red clad runners was dominating the top-15, with the top 3 East runners mixed amongst the top 7 runners from heavily Fairview High School (also in red), with East’s 4th, 5th and 6th runners not far behind. It was clear to those spectating for all of the final mile that the Angel Boys were on their way to State meet, and it was just a matter of whether they were going to finish 2nd or 3rd in the team competition. Higgins and Nussbaum each ran strong second halves of the race and stormed through in personal bests of 16:32 and 16:41 respectively for 6th and 7th place.  Logan (17:06) held on for 16th place while Scudamore (17:24), Hopper (17:33) and Anderson (17:39) moved their way past many of the runners who had gone out too aggressively in the opening mile, eventually securing 21st, 26th and 27th. Senior Jack Kriekels, continuing to get stronger by the week, ran a personal best 17:59 for 33rd, classmate Owen Congdon was 36th in 18:03, and junior Charlie Keglovitz ran a personal best 18:13 for 41st.  Once the dust settle, the East Boys had secured third place and their first trip to the State meet in four years with 74 points, behind just Fairview (33 points) and Boulder (73 points) and well ahead of fourth place Ralston Valley (111) and fifth place Legacy (152).

There was little time to celebrate before the Girls race was off and going. Like the race before, a handful of the top girls from the region were far out front while a large pack gave chase through the first mile. East ninth grader Rosie Mucharsky, as expected, was among the early leaders.  Sophomores Grace Todd and Sophia Shiroff were near the back of the first chase pack while the quartet of seniors Ellison Mucharsky and Annabel Filippini, and junior Helen Miller and sophomore Sasha Bull were a fair amount further back. In this early stage, it might not have looked as if the Angels would be competitive at all, but this early race patience would payoff in the second mile as Rosie Mucharsky secured a hold on 2nd place while Todd moved up into the top-15 with Shiroff not far behind. Ellison Mucharsky would put some distance between herself and her teammates as she made her way up the field, but all of East’s top-7 runners were seemingly passing more runners. Before the meet, the athletes and coaches knew they would need to tally a score under 110 point to have a chance at State, and it looked as if the Angels were close to that goal as they kicked through the finish, with Rosie Mucharsky 2nd (18:03), Grace Todd 12th (19:40), Sophia Shiroff 24th (20:15), Ellison Mucharsky 31st (20:24 – personal best), Helen Miller 37th (20:45 – personal best), Annabel Filippini 45th (21:01 – seasonal best), Sasha Bull 48th (21:09), Bri O’Meara 55th (21:58) and Ellie Goldstein 58th (22:22).  The Angels totaled 106 points with nearly all of the athletes running near or better than their seasonal bests, but on this day that was not quite good enough to go on to State meet as a team. The Angels finished a mere one point behind a deep Monarch High School Team (105) for fourth place, while Fairview placed first with 58, Boulder second with 87 and Broomfield High School third with 88 points. It was a heartbreaking outcome for a team that raced hard and competed well. With their top-15 finishes, Rosie Mucharsky and Grace Todd will go on to compete at the State Meet as individuals.

The Colorado State Meet is on Saturday, October 30th at the Norris-Penrose Event Center in Colorado Springs. The 5A Girls race is at 9:00am and the 5A Boys race is at 10:20am.  We really encourage all of our teammates and fans to come down for this great event. 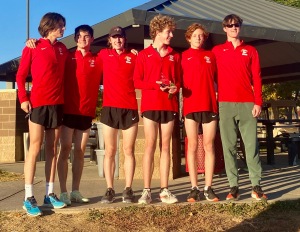 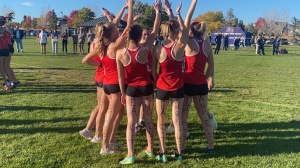