For some, it was yet another hard effort among many previous efforts inside the friendly confines of Denver City Park. For others, it was their first test as high school cross country runners. And for a few enthusiastic alumni, it was a chance to prove their fitness one more time while socializing with their former coaches and teammates. For all, it was an auspicious beginning to the 2018 cross country season.

Denver East is coming off what is largely considered the most successful year ever for the program. In 2017, the Girls won the DPS City Meet, finished second in 5A Region 1, qualified for the State Meet for the first time in a long, long time, and went on to finish 16th in the State. The Boys team finished 2ndin the DPS City meet, were surprise qualifiers for State Meet with a 4thplace finish in 5A Region 1, also finished 16that State, and saw their top runner go on to qualify for Footlocker Nationals out of the Midwest Region and finish 13thin the national championship.

At the 2-mile Time Trial and Alumni Celebration on Thursday, outstanding performances indicate that the coming season may be even better than the last.

The Boys look to have a potent 1-2 punch up front, as juniors Asher Hoyt and Will Daley came across the line in 10:39 and 10:54 respectively. The next six boys finished within 16 seconds of each other, led by juniors Riley Nickols in 12:01 and Elijah Bruggeman in 12:02 , and followed closely by sophomore Xander Pacini, 9thgrader Eamon Nussbaum, junior Jack Beardsheer, and sophomore Cyrus Jenkins-Nieto. The times of these boys compare quite favorably to last year, indicating that this pack may be very competitive in the meets to come.

The Girls Team definitely looks like they will have a very tight pack that will be competitive throughout the season, with the first 8 girls finishing within 18 seconds of each other. Sophomore Abigael Howard did just enough to win, edging out junior Anna Lucy Buddenhagen in identical times of 13:22. That pair was followed closely by sophomore Maya Winfield, junior Elena Thoman, sophomores Maya Nussbaumer and Julia Schor, and a pair of ninth graders – Grace Chambers, and Ellison Mucharsky-O’Boyle. Like the boys, their pack time was significantly faster than the year before.

In the Battle of the Classes, the 11thgraders (class of 2020) took the boys title with the team of Hoyt, Daley, Nickols, Bruggeman, and Beardsheer scoring a mere 17 points between them, with the 10thgraders taking second with 61 points and the 9thgraders finishing a respectable third with 69 points. For the girls, it was the 10thgraders (class of 2021) dominating the day with the team of Howard, Winfield, Nussbaumer, Schor, and Lilia Scudamore scoring 24 points to 52 points for the 11thgrade, 62 points for the 9thgraders, and 102 points for the 12thgraders.

In the week ahead, our Varsity and top JV runners will travel to the Cheyenne Mountain Stampede in Colorado Springs, which is run on the State Meet course on Friday, August 24th. Most of the rest of our JV will scrimmage at the Ram Run hosted by Green Mountain High School of Saturday, August 25th. Please follow the website for details. Also this week with be the Team and Parent Potluck at East on Thursday, August 23rd, where lots of information on the upcoming season will be shared. 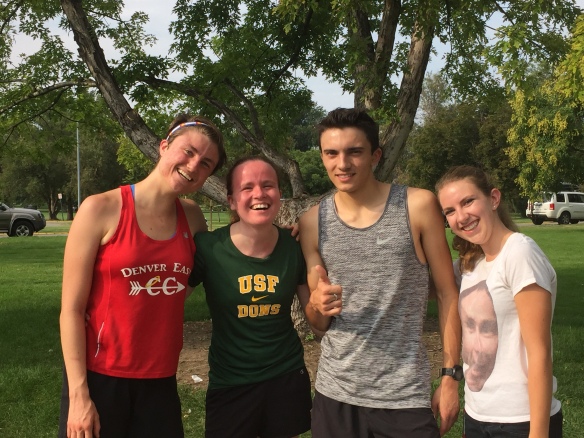