The East Angels split their JV and Varsity teams between the Arvada West Invitational and the Commander Cup Invitational this past Friday. It was a chance to let some less experienced up and coming athletes gain some valuable experience running Varsity. We won’t spend too much time analyzing how these split squads placed in team competition and instead focus on some outstanding individual performances that will portend to future team success in the weeks to come. 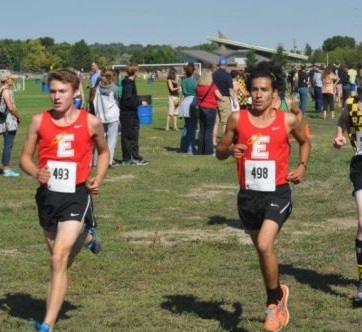 A solid summer of training has paid dividends for Lily Cory, who led the Varsity Girls with a 20th place finish. Fellow sophomore Emily Turner came in next for the Angels, followed by freshmen Serene Mather and Allana MacRossie-Smith, who in her varsity debut ran a personal best of 22:59. Senior Captain Maddie Scholtz rounded out the scoring for the Angels who finished 9th of 15 teams.

Personal bests were run by the first four Denver East runners to cross the line in the JV Boys race: David Spitzer 20:31; Adam Rang 21:14; Jack H Thompson 21:21; and Nick Panagos 21:24. Mac Meeter was the 5th scorer for the Angels JV boys who finished 8th of 14 teams.

Samantha Skeen, in what should be the final JV race of her career, won the JV Girls race by a full minute. Also in the JV girls race, juniors Audrey McGlothlen and Grace Kieft ran to seasonal bests of 24:19 and 25:42 respectively.

COMMANDER CUP:  Similar to the Arvada West meet, the Varsity Boys at the Commander Cup were led by a freshman, this time Kristian Laird who ran to a personal best 18:55, and was followed by fellow freshman Elijah Bruggeman. Junior Alex Weber ran a seasonal best 19:22 on his return to varsity competition. Sophomore Cameron Aydelotte ran a personal best of 19:50 for the Angels while freshman Ballard Kauffman rounded out the scorers for East. Freshman Riley Nickols (20:06) and sophomore Nolan Younoszai (21:27) also made their first appearances in a varsity race.

Nell Salzman was in her usual spot leading the Varsity Girls team, taking 5th overall. Ninth grader Lindsey Weyant followed closely in 7th place in a personal best of 20:45. Laurel Kruger moved past two runners from rival Denver South in the closing stages of the race and finished an impressive 12th place. Frosh Masie Moskowitz and Anna Lucy Buddenhagen came across in identical times of 22:28, followed by juniors Caroline Ritchie (23:34) and Maria Crippen (24:11) – the latter two had seasonal bests. While East finished a bit behind Denver North and Denver South, one got the sense that the Angels will match up well when the whole varsity races together.

This week the Angels travel to two more challenging cross country courses: the Denver North Viking Invite at the Willis Case Golf Course on Tuesday; and the Pat Patten Invitation at Viele Lake in Boulder on Friday, where the quality of competition will be every bit as tough as the course. Personal best times will be harder to come as we get into the second half of the season.